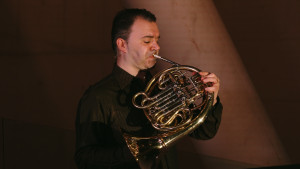 Bernardo was born in Porto, Portugal, and is one of the most prominent Portuguese horn players.

Studied with Jonathan Luxton and Ab Koster, in Lisbon and Hamburg, and attended classes with Radovan Vlatkovic and Hermann Baumann, among others.

Bernardo is member of the Orquestra Sinfónica do Porto Casa da Música, in Portugal since 2000.

He has performed as a soloist, in recitals, chamber music and orchestra in many countries, such as Portugal, Spain, France, Belgium, Holland, Poland, Germany, England, Finland, Luxembourg, the Czech Republic, Russia, Brazil and Mexico.

Bernardo teaches at the University of Aveiro, ESMAE – Escola Superior de Música e Artes do Espéctaculo do Porto and at Espinho’s Professional Music School, in Portugal. He frequently guides masterclasses in Portugal and abroad.

He is regularly invited to be jury of national and international horn competitions, has been in competitions in Portugal, Spain and Finland.

He was awarded the First Prize in the Farkas Competition organized by the IHS, Finland in 2002.

His discography includes several solo works, chamber music and as an orchestral musician. His two solo albums ‘Lunar Songs’ and ‘Solo’ have received rave reviews. He made the first world recording of the work ‘Jeanne d’Arc’ for soloist and wind orchestra by composer Alex Poelman for the Dutch label Molenaar.

Bernardo is also a very active chamber musician, often performing in a duo with piano and in horn quartet. He is a founding member of the Trompas Lusas quartet. The group frequently performs at concerts in Portugal and abroad.

He is Vice-President of the International Horn Society.

Bernardo is a DürkHorns and Romera Brass artist.