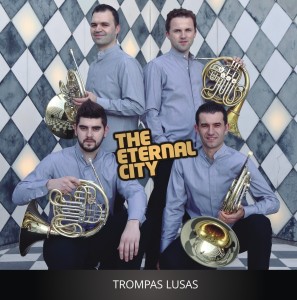 “The Eternal City, the newest recording from virtuoso horn quartet Trompas Lusas, is full of spectacular playing. Equally at ease performing standards in the repertoire as well as world premieres, Trompas Lusas plays with a gorgeous sound, precise ensemble, and technical brilliance. In addition to the superb level of horn playing, this recording is also significant because it presents new works by Kerry Turner, Liduino Pitombeira, Sérgio Azevedo, and Yasuhide Ito. I highly recommend it! ”

“An intriguing mix of new and familiar works, played with wonderful virtuosity and spirit!”

The horn quartet “Trompas Lusas” is one of the finest quartets I have heard in recent times. Their sound is homogenous. Their rhythm and intonation is precise. And they approach each piece I have heard with fresh enthusiasm.”

“In this recording, the Portuguese horn quartet, Trompas Lusas, uses familiar and new works from the horn quartet repertoire to display an absolute mastery of precision and blend. This, the second recording released by Trompas Lusas, is remarkably impressive for its clarity and consistency of tone heard throughout the entire recording.

A highlight is the inclusion of three world premiere recordings. In reading about this ensemble, established in 2010, one learns that the group’s core values revolve around performing both standard and new repertoire for horn quartet. In following with this value, the programming of this CD maintains a thoughtful mix of old and new.

The three new works for horn quartet include the title track, The Eternal City – Fanfara per Roma, by Kerry Turner, Liduino Pitombeira’s, Alcácer-Quibir, Op. 195, and Sérgio Azevedo’s, Sonatina No. 2 for Four Horns. All three new works would be strong additions to the repertoire of any advanced horn quartet. Kerry Turner’s quartet is an exciting and attention grabbing fanfare. Liduino Pitombeira’s Alcácer-Quibir, Op. 195 is an interesting work, sharing its title with the Portuguese name for the city of El Ksar el-Kebir in Morocco. The name of this city translates to “the big castle.” Although no program notes accompany this recording, Pitombeira’s work sounds like the musical depiction of an ancient city, rich with battles won and lost. Sérgio Azevedo’s, Sonatina No. 2 for Four Horns is a workilled with fanfares and colorful melody. Particularly special is the lush second movement that allows Trompas Lusas to display a powerful, yet beautiful group sonority.

The familiar favorites featured on this recording are a refreshing take on works that know so well to many, most notably Paul Hindemith’s, Sonata for Four Horns and Jan Koetsier’s, Cinq Nouvelles (Five Miniatures), Op. 76. This recording musically serves both those who know these pieces well and an excellent starting point for those learning for the first time.

The Horn Call – Journal of the International Horn Society – May 2017